In my continuing love affair with Animal, Vegetable, Miracle, I was amused to discover that Barbra Kingsolver is listed as the 74th most dangerous person in America. As my sister would say, wtf? Obviously, it is highly to dangerous to promote public awareness when it comes to our own food consumption. Kingsolver addresses her dangerousness in her book, which is how I found out about it. Intrigued I did what every good investigator does, I googled it.

Apparently the book was written by Bernard Goldberg, who seems to be a well respected journalist at CBS. His book, Bias, won some critical support but the customer reviews on Amazon for 110 People Who Are Screwing Up America, seem lackluster at most. It appears to me that Goldberg is criticizing trends that are screwing up America, which is all well and good but Kingsolver isn’t responsible for people misinterpreting her message or making the information a trend. To be frank, it seems like a throw away book to make money. Speaking of trends, books like this are very trendy. Maybe Bernie should look in the mirror.

I’m still chipping away at last weeks New Yorker. There was segment in the Talk of the Town section entitled “Family Jewels” and it was about Bernie Madoff’s victims and how they’re all selling valuable family jewelry to CIRCA. CIRCA is a jewelry buying firm located in New York. The little snippet goes on to introduce Tracy Sherman, the company’s Palm Beach director, who had been going around to homes scoping out the jewels for sale. One of her quotes really got me. In regards to the people who are selling these jewels, Sherman advises “Be glad you had these things, and be glad you had great taste, so now you can sell it in order to continue.”

Whoa. Back up a second.

Hundreds of thousands of people are expected to gather at the Lincoln Memorial today for the “We Are One: Opening Inaugural Celebration.” Times reporters are at the event and will regularly update this post throughout the day.

I won’t lie. Bono gets on my nerves. I know this is shameful considering I am a child of the U2 generation. I like some of the music (older is better) and I embrace Bono fully as a musical icon. However, I can’t quite swallow Bono the diplomat/government activist. I have similar problems with Angelina Jolie going to Africa. What frustrates me about celebrities and political and cultural issues is that they make it trendy to care about the world, and that irritates me to no end. I was not impressed with Live Aid, mostly because Africa has been a place of concern for decades. It will continue to be a place of concern long after all the teenagers have abandoned their Live Aid t-shirts for Greenpeace or Habitat for Humanity or whatever Miley Cyrus happens to think is cool at the time.

I really liked this play when I read it in college, and I’d forgotten what a disturbed woman Hedda Gabler is.

Imagine a White House where the Oval Office faces an interactive media wall filled with live commentary from citizens and visitors. Or a White House that is raised and lowered according to poll results, with an unpopular president brought down to the level of disgruntled constituents. How about one that changes colors according to the Homeland Security Advisory System? Or that has been emptied of human content and made into a central server for United States democracy? 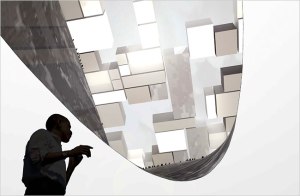