I survived my first AWP. It was a whirlwind but I had a great time. I’ve decided that the book fair is by far the highlight of the entire event. I came home with tons of free journals and ideas of places to submit to. I talked to a lot of different editors, students, and teachers. In line with my fellow AWP bloggers, I give you the highlights of my conference:

*Arriving at the Hilton Chicago and realizing that hotel parking was $53 a night. After cursing the expensive price and circling the surrounding streets (Garmin is a lifesaver) I found parking for $20 a night.

*Wandering the book fair Thursday afternoon with my friend and fellow poet Larry O’Dean while he made hilarious comments about small presses, big presses, and all things literary.

* Walking into our hotel room. You’ll see pictures of the beds. Enough said.

* Attending the AWP offsite event “Reading Between the Lines” at The Beat Kitchen. Out of twenty some readers (prose and poetry) yours truly was dead last.

*The Beat Kitchen. I had one of the best steak sandwiches I’ve ever had. Delicious.

*Waking up at 7:45 Friday morning to sit at Murray State’s table. We were a major sponsor and we had a prime spot. I liked promoting New Madrid to people. It was fun.

* Trying to convince some guy that even though his last two novels had been “well received by The New York Times” that New Madrid would be a good place to submit his short stories.

* Wandering the book fair on Friday afternoon and receiving a free bag from The Poetry Foundation with this Marianne Moore quote on the back ” I too dislike it.”

* Attending a panel (one of the few panels I attended) called Writing Our Passions: Forbidden Topics. To be honest, I wasn’t real impressed.

* Running into Corey Marks and Will Tyler at the bookfair and then eating Chicago deep dish pizza.

* Eating sushi with Natalie and Michael.

* Reading a vampire story by Kim Addonizio in Indiana Review. I’m still trying to figure out if she was trying to be ironic or not…

* Riding in a limo because it was cheaper than a cab to Lou Malnatis for more pizza.

* Voting for the best ice sculpture in the park across the street from our hotel.

A collage from AWP…
These first two pictures are from The Beat Kitchen where we had our reading. The nook is where we read and then there is a shot of the crowd.

These next three shots are from our table at the bookfair. We handed out all of our journals for free. The issue with Abe Lincoln is the one I worked on.

These photos are from the hotel, Chicago Hilton. 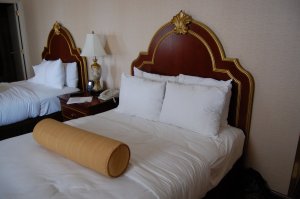 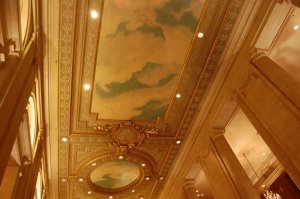 Finally, some of my favorite snow scultptures from the contest across the street. 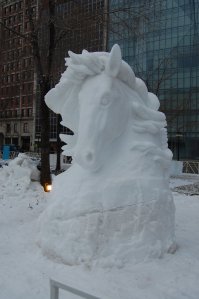 This is a sketch that Dmitry did of our reading at The Beat Kitchen. Check out his website.

I’m the one with the glasses.

2 thoughts on “Monday (Post AWP/Why Didn’t I Get President’s Day Off?) Musings”