A few weeks ago I hung a bird feeder up that my mother gave me for Christmas. It’s in the shape of a little white house with Plexiglas sides, so when you pour the black sunflower seeds inside, it looks like a little black and white cottage is hanging off our garage.

I waited patiently for days for the birds to arrive. I peeked out the windows at every chance. I was even quieter exiting my back door in the morning (careful not to let the screen door slam too loudly) just in case a small bird was enjoying his/her breakfast. But after several days, no birds. Upon trolling the Internet and pestering my resident avian expert (my mother) I was relieved to learn that it can take up to two months for birds to discover a feeder.

Therefore you can imagine my elation when R pointed out that there were sunflower seed shells peppering the snow beneath the feeder. Shells must mean birds, right? Wrong. I was somewhat dismayed to find several large squirrels had discovered my feeder and were gorging themselves on the seeds intended for my birds.

Admittedly, squirrels are annoying. At my parents house, my mother unwillingly feeds Fox squirrels that are bigger than most cats I’ve known. They are loud. They are fat. They are gluttons. I swear at them. I stomp my feet. I yell and I clap. They chatter and swish their squirrel tails, which I think is a the equivalent of giving the finger.

The squirrels resiliency/stupidity/ courage was truly proven earlier last week when they were confronted with a beast whose brain capacity probably rivals theirs. Yes, they came up against our dog. In fact, one of them did not survive the encounter.

It is important to note that even before the squirrels started dining regularly at my feeder, they had a antagonistic relationship with our dog. He barks at them. He attempts to chase them and he even jumps up against the fence in hopes of knocking one off. He’s not messing around. This pasts summer he managed to catch one and only dropped it when I yelled and startled, the stunned squirrel dropped from his mouth. The squirrel was easy to identify over the passing weeks because he was missing a large patch of fur from his back.

Apparently, squirrels do not have a good social network because they continue to frequent our yard, which brings us to the most recent event. Because we like to give the squirrels a fighting chance, we try to scare them off before letting Kweli (our dog) outdoors. However, Kwe is fast and agile (despite being hit by a car as a puppy) and he uses our back porch as a launch pad. All of these things combined made for squirrel carnage as R opened the door, Kweli took off, and the squirrel made a fateful mistake. Instead of making for the fence like his buddy, he scrambled back up the garage and tried to hang onto the metal hook the bird feeder is attached to. He slipped. He fell. Kwe pounced. It was over in a matter of seconds.

Some people may say, “Oh! The poor squirrel!” or “What are you doing to do?” while peering at my panting, hairy dog who is looking very pleased with himself. What am I going to do? Nothing. As you may or may not have noticed, squirrels are in abundance. More to the point, dogs kill things. Wait, scratch that. Animals kill things. My Labrador used to dig moles right out of the ground and mangle woodchucks. My childhood cat used our front doorstep to display a diverse array of noses, ears, tails, and feet (you can’t eat those parts). I’m not squeamish and if you don’t think your dog might do the same if given the opportunity, put it in a fenced yard with a squirrel sometime.

Needless to say, there are still plenty of squirrels in our yard. Also, because I am an animal lover, I do try to warn them before sending Kwe out to patrol the perimeter.

So, did the birds ever come, you ask?

Yes, they have finally discovered the feeder and when I looked out the window today, they were perched on the feeder feasting and the squirrels were cleaning up the seeds from below.

Some of the birds visiting today: 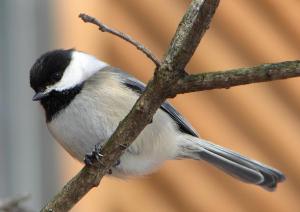 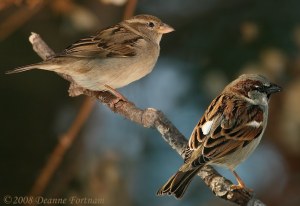 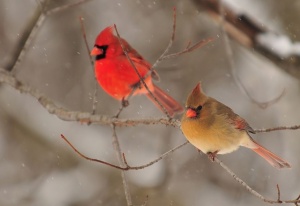 One thought on “Waiting for the birds…”