Last night I finished reading the latest pick of the faculty book club that I belong to a school. The Immortal Life of Henrietta Lacks was a very interesting book and I learned a lot about the medical industry that I did not know. 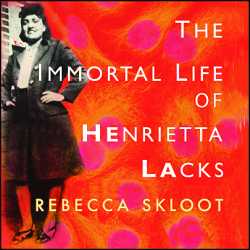 The book is about the story of Henrietta Lacks, the woman whose cells became famous. Henrietta’s cells (HeLa cells) are used all over the world in medical research. Research done using her cells created the vaccine for polio and her cells have been used in research for cancer and AIDS. The books is crafted in a way that shows the separate stories of Henrietta and her cells and how those stories eventually converge and the havoc that it wreaks on her surviving relatives.

The book was written by Rebecca Skloot, who incidentally was at AWP this past weekend, and she began when she was just a student. She became interested in HeLa cells and how no one seemed to know anything about the woman from which these cells came from. Skloot’s research is dense and complicated but she does a good job of breaking the science down, making it accessible to a wide audience.

However, it is the personal narrative that Skloot constructs that will draw you into the book right away. It is a heartbreaking narrative that raises important questions about privacy, morality, poverty, education and health care. I think it is important book for people to read not only because Henrietta and her family deserve to have their story told, but also because people need to be aware of what the current laws are regarding human tissue. As Skloot says in her afterword, “When I tell people the story of Henrietta Lacks and her cells, their first question is usually Wasn’t it illegal for doctors to take Henrietta’s cells without her knowledge? Don’t doctors have to tell you when they use your cells in research? The answer is no–not in 1951, and not in 2009 when this book went to press.”

All books are meant to educate the audience in some way shape or form. This book opened my eyes to a lot of different issues occurring in the medical community and I think we owe it to Henrietta and all people like her to listen to her story.

Rebecca Skloot set up a scholarship fund for descendents of Henrietta Lacks. Donations can be made at www.HenriettaLacksFoundation.org.

One thought on “The Immortal Life of Henrietta Lacks”