This is how my husband explained my trip to New Harmony, IN to his sister: “Yeah, she’s going to this place in the southern part of the state where there was this religious cult…”

Rest assured, friends, I’m back and I did not join a cult. I did spend a week in the small town of New Harmony sleeping in a bunk bed, wandering around in the rain and writing. I did a lot of writing. This opportunity to stage my own mini-retreat came in the guise of chaperoning a group of twenty some honors students for their “domestic travel study,” a requirement for their degree.

New Harmony is a fascinating place, and while I’m not going to get into the history here in this post, because it is long and convoluted and really odd, you should totally spend some time there if you ever get the chance. The way I explained it to my parents was, the Harmonists started off in Pennsylvania waiting for Jesus. He didn’t show up, so they moved to Indiana. He didn’t show up there either, so they went back to Pennsylvania, at which point they all died out because they believed in celibacy. The result is this beautiful, bucolic, kinda creepy little town in southern Indiana that was restored starting in the 1970s. Obviously there’s more to it, but you get the idea.

On Wednesday morning I took my students to a series of spots around town and we read some poetry: “Sleeping in the Forest,” by Mary Oliver, “Water Picture,” by May Swenson & “Bringing Things Back from the Woods” by David Shumate (to name a few). One of the places we visited was called the Roofless Church, and when I scouted locations for possible poetry drafting, this place seemed perfect. 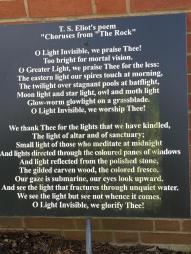 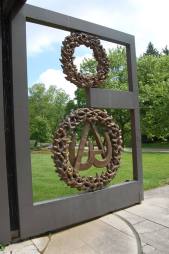 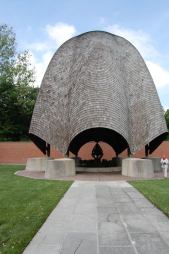 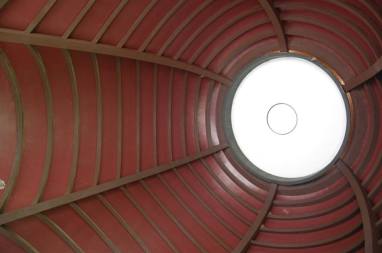 The church is essentially a large, open area courtyard and it is roofless because the benefactor, Jane Blaffer Owen and the architect, Phillip Johnson, decided that “only one roof—the sky—can encompass all worshipping humanity.” The space is primarily dominated by a dome that “was built in the form of an inverted rosebud, tying it to the New Harmony Community of Equals, whose symbol was the rose.”

The students and I talked craft for about fifteen minutes and then I sent them off on their own for about twenty minutes to see what they could come up with on their own. It’s important to stress we were just free writing, so I encouraged them to write about whatever they wanted as long as it had something to do with our surroundings. We repeated this process at two other locations and then shared some of what we wrote.

I was so taken by the roofless church that I went back the following morning and wrote for two hours. By the end of my time, I had the sketch of a poem and by the time we left New Harmony on Friday afternoon, I had a full draft. This may not seem like a big deal to some, but I’m a notoriously slow writer, so the speed at which this poem came to me made me happy. I worked on the piece a bit more this afternoon and I’m really liking it so far.

The moral of the story? Apparently traveling to once strange, utopian communities can be be good for the creative mind. Of course, it could be the simpler idea that a change in scene and some time to think is usually a good thing.